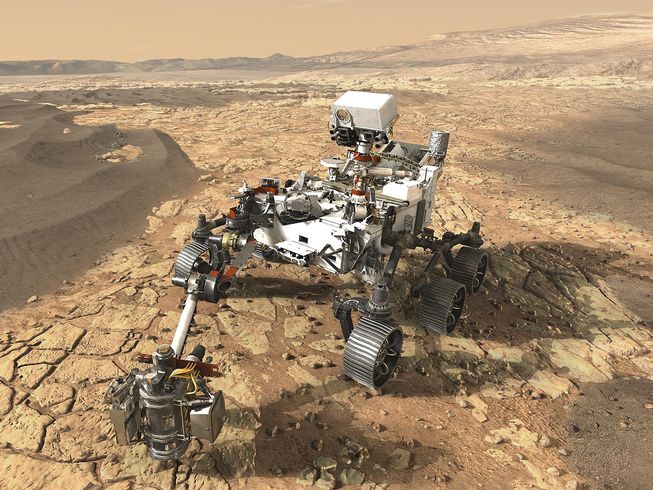 The Mars 2020 rover has arrived at the launch site in Florida. The newest Mars rover is developed by the US space agency NASA. The rover reached Kennedy Space Center after completing a 2,300-mile journey from California. The rover was assembled in a sterile laboratory at the space agency’s Jet Propulsion Laboratory in Pasadena, California.  It is scheduled to launch on July 17 on an Atlas V rocket. The rover will reach the Red Planet in February 2021. As planned by the agency, the rover will touch down in Jezero crater on the planet. Mars is the fourth planet from the Sun in the solar system and next to Earth.

The assembly, test and launch operations for the rover began way back in January 2018. It took almost two years for scientists to develop the rover which will take to the skies in the summer as it heads to the Red Planet. According to NASA, two US Air Force C-17 Globemaster cargo planes delivered the rover at the launch site. The agency said it will undergo final preparations at the Kennedy Space Center for the next few months. It will then head to Cape Canaveral Air Force Station Space Launch Complex 41. It will be mounted atop an Atlas V rocket before it lifts off.

The Mars 2020 rover is approximately the size of a car. It has seven-foot-long arms for carrying out research. According to NASA, it will search for signs of life on the Red Planet. The rover is equipped with the latest scientific and engineering tools to help study the martian atmosphere in extraordinary detail. The rover has a drill to collect core samples. The specially designed tubes will collect Martian soil and rocks. These samples will be brought back to Earth in a future mission. The rover is fitted with 23 cameras to capture pictures of the planet’s surface. Its two ears will record the sound of martin winds. The space agency said data collected during the mission will contribute to the success of the proposed human exploration of the planet. The Mars 2020 rover will cover roughly 200 yards per martian day.