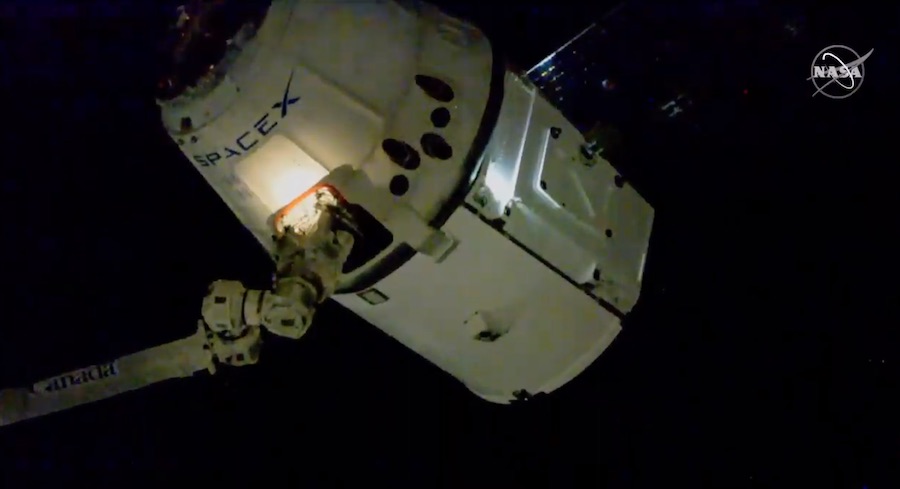 Dragon cargo of SpaceX, loaded with critical supplies, has reached the International Space Station after three days. The reusable cargo spacecraft was launched by Falcon 9 rocket of SpaceX. It carried a beer brewing experiment, genetically enhanced mice, a miniaturized satellite CubeSat, and other scientific research payloads. The robotic cargo freighter carried 5,769 pounds of supplies, experiments, and hardware for the ISS which has a crew of six persons. The cargo was launched from a launch pad Cape Canaveral in Florida on December 5. “Capture confirmed! Dragon has so far done 19 flights and delivered over 95,000 pounds of supplies to the orbiting laboratory,” SpaceX tweeted. This was the last resupply mission by the company to the International Space Station for 2019.

Along with a beer experiment sponsored by Anheuser-Busch and 40 genetically-engineered mice, the cargo spacecraft carried a Japanese Earth-imaging instrument. There was a payload onboard the Dragon to investigate the flame behavior in confined spaces in microgravity. The 40 mice delivered to the International Space station will help scientists gauge the effectiveness of experimental medicine to fight atrophy muscle and bone. All these rodents will return to Earth alive in January next year. They will be then assessed by scientists to find out how the drug affected their rate of recovery by administering the same myostatin protein blocker. The main purpose of this project is to determine whether removing myostatin can prevent, or at least lessen, the loss of muscle due to microgravity.

Emily Germain Lee said that astronauts spending a lot of time in space also lose bone mass. “So anything to prevent bone and muscle loss would be very crucial in maintaining the health of astronauts,” Lee said. Scientists also want to study the way solid materials burn in different confined spaces in microgravity. For this, the researchers will ignite solid fuel samples inside a protective enclosure on the space station. “We will then study how fire interacts with its immediate surroundings,” said Ya-Ting Liao. Liao is an aerospace engineering at Case Western Reserve University.